How Crohn’s Disease Brought Out My Inner Mama Bear

Ah, motherhood. The most magical and difficult role I’ve ever taken on. As a woman whose battled Crohn’s disease for nearly 13 years, I thought I knew what fatigue was in my past life. Then, I had my darling son. Reid Robert. The apple of my eye, but also the little human who causes me to run on exhaust fumes almost every day.

Reid is on the move and now there’s no turning back. When he’s not crawling around trying to investigate the whole house, he’s stuck in the bathroom with me. Pulling the toilet paper down as fast as he can. And finding it highly entertaining, might I add. NOTE TO SELF: Never have a free-standing toilet paper holder in your bathroom when you have little ones, mistake number one! Gone are the days when he was content snuggling for hours on end when mommy was having a day riddled with abdominal pain or sheer exhaustion.

Recently, Reid had to make several trips to the bathroom with me. As I scooped him off his alphabet lettered playmat and into my arms like a football, I felt guilty. Here we go, again. This poor guy has to come sit on the bathroom floor as I rush to go to the bathroom. Over and over again. After a few trips, I looked down at his smiling, inquisitive face. I said, “Reid, someday I’ll tell you. Someday you’ll understand that mommy has a disease. But for now, you’re my sidekick.”

Despite the exhaustion, fatigue and brain fog—there’s something special about motherhood with IBD. Our focus goes from solely being on our own experiences and pain—to someone else. As someone who’s depended on being taken care of for so long, it’s rewarding to be able to take care of someone else. It’s rewarding to put my baby to bed each night and know that despite my disease, I’m still getting to experience motherhood in all it’s glory. Whether it’s bathroom breaks, cuddles on the playmat or smiling from afar on the couch as my husband entertains him, Reid will never know any different.

IBD is a family disease. It’s not just about me. It’s about all of us. My son serves as my greatest inspiration for strength in my battle against Crohn’s. He smiles and looks deeply into my eyes during my injections every other Monday. His innocence and happy demeanor bring sunshine to my life on days that were once doom-filled. When I look in the mirror and see my scars on my abdomen, I don’t think about my bowel resection surgery, but rather the c-section that brought him into this world. In many ways, he’s shielded me from past pain and shown me the brightness of the future.

With each poke and prod and with every pill I pop, I know it’s not just for me, but for him. My greatest fear is being hospitalized as a mom. It used to be more of a battle between Crohn’s and I…now, it’s an all-out war. Mr. Crohn’s, meet Mama Bear. Shits about to get real. Literally. 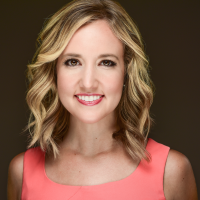 How Crohn’s Disease Brought Out My Inner Mama Bear